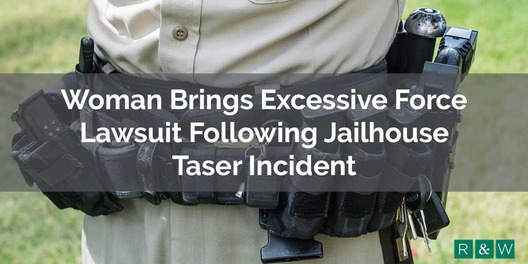 Last month, a Schuyler County, Illinois, resident brought a lawsuit against the Schuyler County Sheriff’s Department in the U.S. District Court for the Central District of Illinois, alleging that excessive force was used against her and that her Fourth Amendment rights were violated.

Specifically, the victim alleged that a male correctional officer shot her with a Taser, then “violently” cuffed her, dragged her out of her cell and took her to isolation, “chok[ing] her to the ground” at some point along the way.

According to the above-linked My Journal Courier article, the victim suffered injuries to her back and shoulder, then suffered a miscarriage a week after the incident, which took place when she was five weeks pregnant.

The lawsuit claims that the victim—who was reportedly serving a sentence on weekends for driving without a license—was reprimanded for her phone usage by a corrections officer, which triggered an argument that led to the physical confrontation. Her injuries necessitated same-day treatment at a local hospital, and she visited a second hospital seven days later, when she woke up and discovered she was bleeding. .

Taser Incidents Leading to Excessive Force Lawsuits Across the Country

The above-described case is yet another disturbing jailhouse incident, much like other cases that our law firm has pursued.

As you may know, this past September we won a $750,000 settlement against three Cheatham County (Tennessee) Sheriff’s deputies in a nationally-recognized excessive force case in which the victim was repeatedly Tased while he was restrained in a restraint chair, suffering dozens of Taser burns.

In fact, the Cheatham County incident was recently highlighted by the United Nations, with the U.N. special rapporteur on torture calling out the Cheatham County deputies, as well as jailers in three counties in three other states (Arkansas, Ohio, and Oklahoma) “for allegedly using excessive force via Taser shocks against inmates in incidents which could be construed as ‘torture.’”

The special rapporteur on torture also cited a recent Reuters report—a special report on Taser use in U.S. jails—that “documents 104 prisoner fatalities after corrections officers deployed Tasers, often with other force. Most inmates were unarmed, and many were handcuffed and pinned to the ground,” noted Reuters.

In the past few weeks, we’ve written about a pattern of excessive force taser lawsuits in Allentown, Penn., and an 86-year-old South Carolina man who received a $900,000 settlement after a taser incident that caused significant injury.

How Our Law Firm Can Help with a Taser Case

Sadly, excessive force cases involving Tasers appear to be happening with increasing frequency around the country.

If you or a family member have been a victim of what you believe to be the use of excessive force and/or the improper use of Tasers by police, we encourage you to call us at 615.256.6666 for a free, no obligation consultation.

Experienced excessive force attorneys are few and far between, and it’s vital to work with a law firm that has experience with federal civil rights cases.

Similarly, if you’re an attorney in Arkansas, Ohio, Oklahoma—or elsewhere outside of the state of Tennessee—and looking for help with a Taser case in your home state, don’t hesitate to contact us online or to call us at the above phone number. We fight to get justice for victims of excessive force.