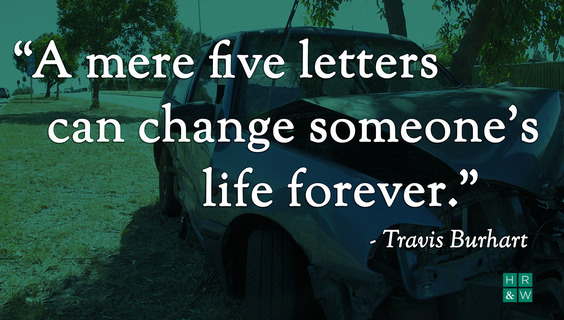 I am very pleased to announce the winner of the Williamson County Stop Texting and Driving Scholarship- Travis Burhart. As you know if you have read my blog posts on this web site in the past, I have become passionate in my desire to eliminate texting and driving. As a result, I along with the support of my law firm decided to offer a scholarship to the student who did the most to encourage others to stop this deadly practice.

While I read a number of worthy submissions from Williamson County, Young Travis perfectly captured the essence of this battle with one hugely compelling sentence. As Tom Cruise said in Jerry Maguire- “you had me at hello.” Well, Mr. Burhart had me, and a great many others I hope, with his very first sentence…

That was the case for John Breen, a twenty-three year old marine. On March 15, 2009, Breen was texting and driving. As he typed the first five letters of his message, he lost control of the car and swerved off the road, thrown out of the vehicle resulting in a skull fracture. He died from his injuries.

The anguish of the situation is magnified when we see the suffering his family and friends bear. His parents can never watch him with pride as he wears his marine uniform. His friends will never be able to visit with him and share a laugh. And, most heartbreakingly, his two-year-old daughter will never completely know her father. All of this stems from a five-letter text message.

Five letters is not a lot. Neither is five seconds, the average time it takes to reply to a text message. However, one can travel the distance of a football field in five seconds when traveling at 55 miles per hour. Also, an individual’s time spent with his or her eyes off the road skyrockets an astounding 400% while texting and driving. In the end, people who text and drive are 23 times more likely to be in an accident and 6 times more likely to be in an accident than those driving while intoxicated.

Sadly, Breen was not concerned with the dangers of texting and driving. Compared to the perils he faced as a marine, they seemed trivial and frivolous. However, in the end a cell phone is what took his life, not a bullet nor a bomb.

Just like Breen, it is easy to feel invincible while on the road. We often hear about the risks of distracted driving but frequently disregard them. It seems like we will never be the person who becomes the next statistic, but there is a greater chance we will have the same fate as Breen if we text and drive. According to the National Safety Report, a staggering 1.6 million car crashes occur each year due to cell phone use, with 330,000 of them resulting from text messaging. Therefore, one out of every four car accidents is the result of texting and driving. With one out of three adult drivers admitting to checking their phones while driving, no one, not even a tenacious, courageous marine, is invulnerable to the risks of distracted driving.

The fatal letters of Breen’s final text message spelled out “yeah t.” The message was incomplete and ended abruptly, much like his tragically shortened life. Sending a text message behind the wheel is simply not worth the risk, and it will never be worth it. No message is significant enough to justify the dangers of responding while driving.

When discussing the risks of texting and driving, this is the story I will share. It shows how none of us are invincible, because what many believe are a few harmless letters can alter our fate, prematurely ending our life and creating preventable sorrow for family and friends.

In closing, I believe this essay is compelling and persuasive. In short, it is everything I hoped I would get when I started this scholarship. If clear and concise thoughts such as these can become as much of our thought process as reaching for a phone is, we will be on our way to eliminating this plague.