What You Need to Know When Charged With Domestic Violence 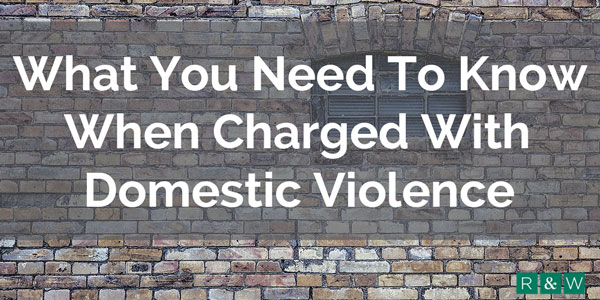 Domestic violence offenses are treated differently than every other kind of assault offense. These differences exist before, during, and after a case goes to court. “Domestic” cases are where the suspect and victim are related, dating, married, or roommates.

Tennessee law and local police policy both require that the police must arrest the “primary aggressor.”

If the police are called and it appears an assault occurred, they must arrest someone. Even if neither person wants the other to be charged.

It can often be difficult to determine the “primary aggressor” when people give conflicting stories or there are other inconsistencies. Sometimes police will actually arrest both people. Sometimes police will arrest only the person who was actually the victim. The Tennessean recently covered a case in which that happened to my client. Fortunately, we were successful in getting the charges dismissed.”

When people are arrested for other offenses, they will be released from jail without any significant conditions once they pay the bail. This is not the case however when it comes to domestic violence offenses.

What is the “Cooling Off Period” For Domestic Violence Arrests?

A person arrested for domestic violence will be kept in jail for a minimum of twelve hours, even if they can pay the bail right away.  This twelve-hour detention is known as the “cooling off period,” intended to prevent suspects from attacking the victim again immediately upon release. Unfortunately, magistrates routinely impose this detention even if there is no evidence the person poses a continuing threat to the alleged victim.

Once a person is released, they are then subjected to numerous conditions. This can include not contacting the alleged victim, returning to the person’s own house, and even having GPS monitoring. Failure to abide by these conditions can result in the person being put back in jail until the case gets resolved.

Once the case gets to court, there is an entirely different set of procedures in many counties. There are special courtrooms, prosecutor units, judges, and policies only for domestic violence cases. Additionally, there are certain types of punishment that are only imposed in domestic violence cases, including a six-month “batterer intervention program.”

Consequences of A Domestic Violence Conviction

For these reasons, domestic violence charges are particularly serious and include significant consequences merely from being charged. Unfortunately, many people are subjected to these conditions who are not only completely innocent, but may actually be the victim themselves. If you have been charged with a domestic violence offense, it is important to contact an attorney immediately to help navigate this complex situation.

“Fighting for your rights”

Contact Ben Raybin and the law firm of Raybin & Weissman for a confidential consultation of your case today at 615-256-6666.