Time to Take A Stand On Texting & Driving

As I have discussed many times, texting and driving is an inherently very dangerous act. As a parent to teenagers and as a person who drives a long way every day, trying to end this plague is a passion of mine. 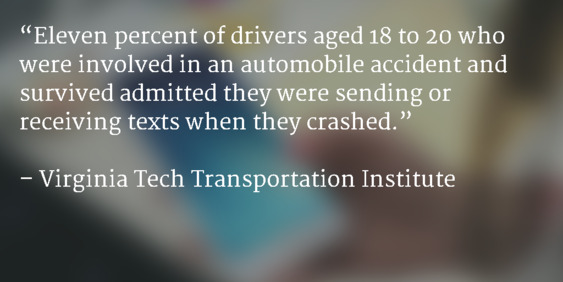 In light of same, I have decided it is time to take a stand- and the stand I intend to take will hit offenders where it hurts most, in the pocket book.

Our Tennessee roads and highways are fraught with bad drivers, often times the result of the distraction of texting. As often as not, injured people come into my office complaining that the person who hit them was texting. Obviously, when this happens, a lawsuit results.

So what do I mean when I say it is time to take a stand? Isn’t filing a lawsuit taking a stand?

What Happens In Negligence Cases

To answer this question, we need to look at the personal injury lawsuit that commonly arises out of a car accident. In Tennessee, the “typical” cause of action filed when a driver is injured by the negligence of another is a complaint based on negligence. Simply put, somebody wasn’t operating their car with reasonable care and caution, and as a result, injured someone.

When this happens, the law provides for an award of compensatory damages.

“Compensatory damages: the amount of money necessary to replace what was lost and nothing more.” -Black’s Law Dictionary

While this is an overly simplified definition, and while I discuss damages in much greater detail in this post, the “usual” personal injury negligence lawsuit compensates a person for the actual injuries and losses incurred. In evaluating this type of the case, we consider fault. However, we do not consider intent.

In a negligence action, it is not required to establish the defendant intended to hurt you. If you were injured because someone was negligent, that is, failed to pay proper attention to what they were doing, you are entitled to be made whole.

On the other hand, there are damages designed for more severe cases- cases where we do look at intent. These cases involve punitive damages- damages designed and intended to serve as a deterrent to prevent the behavior from ever happening again.

As you might suspect, these cases carry much larger monetary awards than a standard negligence case.

When Judgements Go Beyond Compensation

In cases where the person who injured you acted either intentionally, maliciously or with gross negligence, the Tennessee courts have decided that compensatory damages are not enough. Under these circumstances, you may be entitled to punitive damages.

As defined by the Tennessee Supreme Court, in Hodges v S.C. Toof and Company, 833 SW 2d 896 (Tenn 1992), punitive damages are damages in addition to compensatory damages that are awarded to an injured person and are intended to punish the wrongdoer.

In Tennessee, if you can establish by clear and convincing evidence that the person acted intentionally, or recklessly, punitive damages may be appropriate.

In the case of texting and driving, there can be little question that the offending driver is acting intentionally. Intentional behavior, as defined by the law in the Hodges case, is when it is the person’s conscious objective or desire to engage in the conduct or cause the result.

Further, it certainly could be argued that it is reckless to text and drive. In Tennessee, a person acts recklessly when the person is aware of, but consciously disregards, a substantial and unjustifiable risk of such a nature that its disregard constitutes a gross deviation from the standard of care that an ordinary person would exercise under all circumstances (T.C.A 39–11–302.) 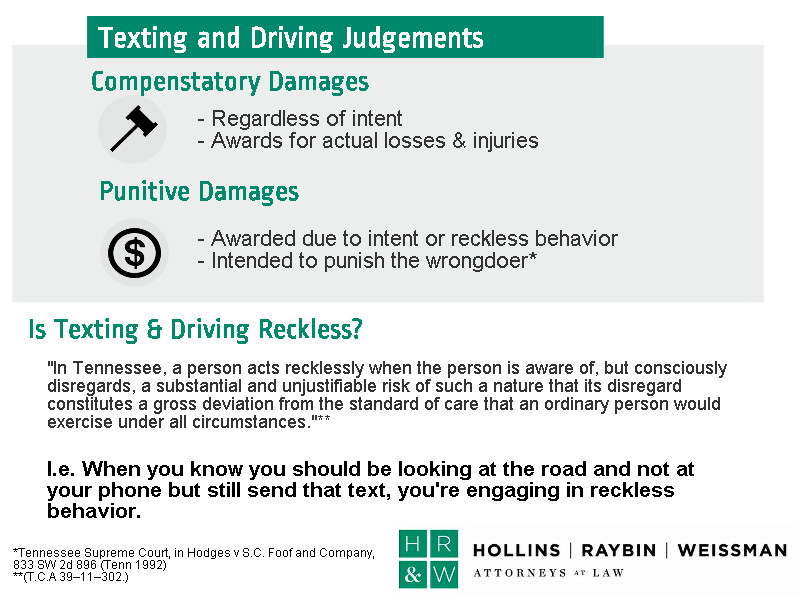 Going forward, in my cases where I can establish texting to be the cause of the accident, I intend to ask juries for punitive damages. Perhaps these damages will serve their intended purpose and we can end this plague on our roadways.

I challenge other personal injury attorneys to take the same stand on texting and driving cases, together we can save lives in the future.