Texting & Driving: Can the Sender of a Text be Liable Too?

As I have commented on many times in this site,texting and driving is a hazard that needs to stop. I have covered a variety of different thoughts on this issue.

That being said, I want to comment on an aspect that most people probably have not thought about- specifically what is the responsibility of a person texting someone they know to be driving.

Texting and Driving is such a problem that I have made it my mission to deter drivers from picking up their phones to text others while they are behind the wheel. If we can use the legal system in a positive way to create a deterrence where drivers are afraid to text and drive, it would be a tremendous accomplishment. 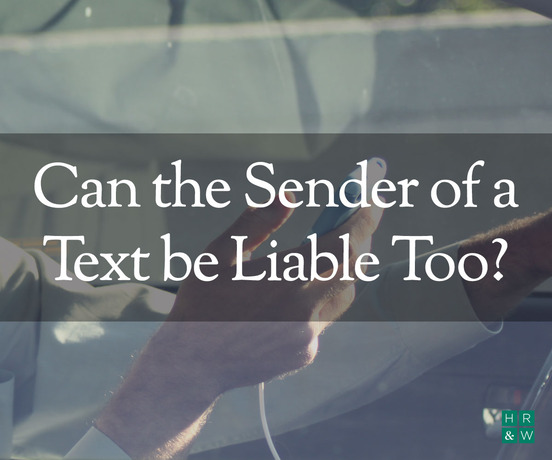 However, what is to stop others who may be safely seated at home or at the office from sending a text to another who is driving? What stops someone sitting at a desk from contributing to the distraction of a driver?

The answer potentially comes from examining the liability of the non- driving texter. Specifically, if someone knowingly chooses to distract a driver, and that driver injures someone, that person should be held accountable. While this theory is relatively novel, it is not unheard of.

What’s the Liability of Non-Drivers?

In New Jersey, there was a case where this issue was tried. http://www.nj.com/essex/index.ssf/2013/08/state_appeals_court_says_texters_can_be_liable_for_distracting_drivers_but_tosses_out_claim_againt_r.html

In the case of Kubert v Colonna, two young teenagers were texting while one was driving and the other was not. The recipient at one point picked up his phone to read the text and reply. While doing so, he drifted into the oncoming lane of traffic. colliding head on with a married couple riding on a motorcycle. Each of the motorcycle riders, Linda and David Kubert, suffered devastating injuries. 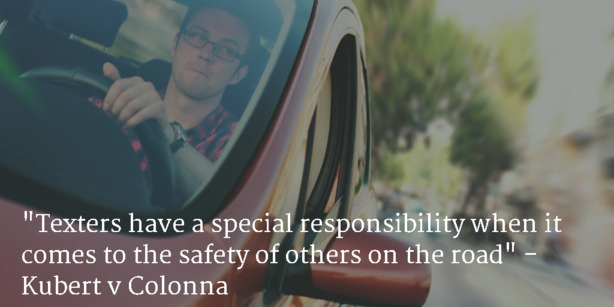 The Kuberts sued both the driver, Kyle Best, and the sender of the text Shannon Colonna. Young Ms. Colonna was at home when the incident occurred. The Kuberts settled with the driver and took Colonna to court. They argued the sender of the text was just as liable as the recipient because, by texting the driver, she had electronically placed herself in the vehicle with him, causing him to be distracted from the road ahead.

While Colonna was not found liable, the decision was very fact specific. Colonna claimed not to know Best was driving while they were exchanging texts. As the Plaintiffs could not prove otherwise, Colonna was absolved of wrongdoing for the performance of a legal action. However, in what may well become a precursor to a future landmark decision, the Court opined that texters have a special responsibility when it comes to the safety of others on the road.

“Just as the public has learned the dangers of drinking and driving through a sustained campaign and enhanced criminal penalties and civil liability, the hazards of texting when on the road, or to someone who is on the road, may become part of the public consciousness when the liability of those involved matches the seriousness of the harm. -Justice Ashrafi”

So there you have it, not only are the texting drivers that cause accidents put on notice but also the senders of those text messages if they have direct knowledge that the recipient is operating a vehicle at that time.

This furthers our battle on the issue of texting and driving. It widens the scope and creates a deterrence for all individuals to be very careful when getting behind the wheel.

This gives some added significance to the tips I present in my Texting and Driving-IT CAN WAIT blog.

Not only should you refrain from picking up your phone while driving, alert others before you get behind the wheel to prevent them from distracting you.

If you were in a car accident involving texting and driving, we’re here to help get the representation and compensation on your personal injury case that you deserve.