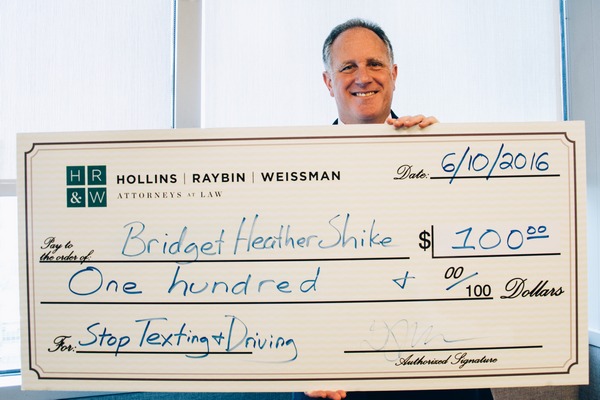 Our 2nd Annual Texting and Driving Scholarship competition has come to a close. We asked students to create short PSAs on the dangers of texting and driving. We could not believe how powerful, creative and touching the videos entries were.

We’ve selected and awarded our three scholarship winners but we were so impressed with a large number of entries that we decided to add an honorable mention award.

One of our Honorable Mention recipients video’s, “Distracted,” by Bridget Shike:

In Bridget’s video, a young girl waits for a friend to pick her up. When her friend arrives, the girl is surprised that the driver of this car has someone sitting in her lap.

Bridget’s PSA video shows that drivers who text and drive are just as “distracted” as if they are sharing the driver’s seat with another person.

I had the pleasure of speaking with Bridget last week.

DW: Hi Bridget, thank you for talking to me. I love your video!
BHS: Thank you so much.

DW: Tell me a little bit about yourself.
BHS: I’m a full-time student at MTSU, and I’ll be a junior next year. I’m also a founding board member of our school’s Women in Film and Television club. It promotes and encourages women having a more prominent role in the film industry.

DW: That’s excellent. MTSU is a great school. What is your major there?
BHS: I’m in the video and film production program.

DW: Well, that explains why you wanted to make a video for this contest. I was also wondering if the purpose of the video meant something to you personally as well.
BHS: Yes, it really does. Recently, I was riding in the car with my boyfriend and a woman rear-ended his car. I’m pretty sure she was texting.

DW: That is terrible.
BHS: It really is.

DW: So, did that inspire the story behind your video? It was such a clever idea.
BHS: Thanks! With the video I wanted to say that a lot of situations are happening on the other end of your texts. I’ve gotten snapchats from friends while they were driving. It’s like people are around you all the time.

DW: Are you in the video?
BHS: I am, actually. I’m the one sitting in the lap.

DW: Oh funny, and did you film the video too?
BHS: Yes, I wasn’t originally going to be in the video, but we were rained out on the first day we planned to do it. So, we lost some of the people from the first cast when we had to reschedule it. I was actually surprised that I placed since it didn’t go exactly as planned.

DW: I really liked it. Congrats! Do you have plans for the prize money?
BHS: Thanks! $100- I’ll probably put it towards school.

DW: That can be expensive. Do you know what you want to do after you graduate?
BHS: Not yet. I’m interested in a lot of different things right now. It’s difficult to narrow everything down.

DW: That’s a good thing. I was wondering if you were interested in Advertising due to the PSA/ commercial aspects of the video.
BHS: That’s definitely a possibility for me. Actually, my older sister is an Advertising major. She’s the one driving in the video.

DW: Good luck in whatever you decide to do, and thanks again for talking to me.
BHS: Thank you!

Bridget’s video stood out on account of its creativity and the lasting impact it has on its viewers. You wouldn’t get in a car if the person driving had another person seated in their lap, and a driver with a phone in their lap could be just as dangerous.

Congratulations again, Bridget, and thank you for your contribution to our crusade against texting and driving.