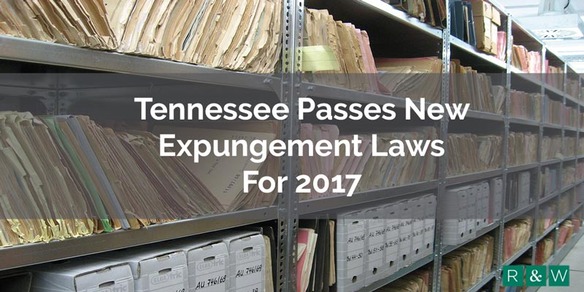 The Tennessee Legislature has passed three new laws regarding expungement in 2017. Expungements allow destruction of public records regarding a criminal charge or conviction. In my previous blog post you can read frequently asked questions about existing expungement laws  in Tennessee.

An existing law allows for expungement of certain convictions after five years, unless the person has any other convictions from unrelated incidents.

Now, under Public Chapter 298, a person may expunge two convictions from unrelated incidents subject to three conditions: (1) each offense is independently eligible for expungement, (2) both convictions are not felonies, and (3) the person has no other convictions. You can already expunge an unlimited number of convictions arising from the same incident, as long as each conviction is authorized for expungement.

The legislature has reduced the expungement fee from $450 to $280 under Public Chapter 456. The new law says the fee is only $180, but the clerk may charge an additional $100 under another law. There is still no fee to expunge dismissed cases.

The legislature has amended “partial expungements,” where a person is charged with a multi-count indictment and at least one count results in conviction while at least one is dismissed. For example, a person may be charged with both assault and vandalism, but is convicted only of the vandalism count.

Under Public Chapter 358, the person may have the dismissed charge(s) removed from electronic databases maintained by the government. Under the old law, the clerk was required to also redact certain records from the paper court file.

For questions about expungement eligibility, please visit this FAQ page or call our office at 615-256-6666__.

Expungement of Tennessee Convictions – Erasing the Past