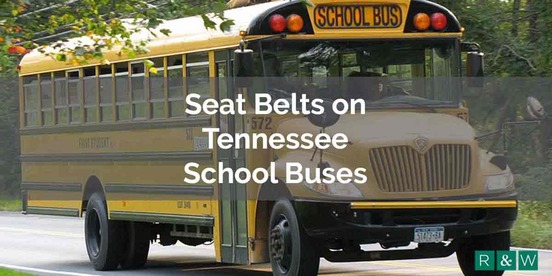 “The school bus is the safest vehicle on the road. Your child is much safer taking a bus to and from school than traveling by car,” maintains the why doesn’t your child’s school bus have seat belts?

The argument made by the NHTSA (and others) is that because of a concept called compartmentalization, “children are protected from crashes by strong, closely-spaced seats that have energy-absorbing seat backs.”

The problem is that compartmentalization isn’t much help when a school bus is T-boned or involved in a rollover crash.

For example, eight students were injured and hospitalized after an accident last month in Manchester, Tennessee. (Manchester is in Coffee County, an hour-and-a-half southeast of Nashville; it’s arguably most famous for being home to the annual Bonnaroo Music Festival).

In that case, a vehicle reportedly ran a red light and T-boned the school bus. In another recent wreck, a school bus flipped over in Tallassee, Tennessee (Blount County), which could have been a tragic accident had children been onboard and not just the driver.

The good news is that momentum appears to be building towards passing a school bus seat belt law in Tennessee after efforts to pass a law in 2017 stalled. It’s an effort that originally got underway in earnest in the wake of a horrific distracted driving accident in which six elementary students were killed when the school bus in which they were riding flipped on its side.

Rep. JoAnne Favors (D-Chattanooga), one of two legislators who have said they will redouble their efforts to pass a bill, appears to have been further convinced of the need to add seat belts to school buses during a “seat belt safety summit” in Westfield, Indiana, this past summer.

“I think we’re going to have more support than was anticipated,” said Favors in an interview with WRCB-Chattanooga, a reference to concerns about the cost of installing seat belts on school buses.

Favors’ District 28 was the site of the aforementioned fatal distracted driving crash, as well as a December 2014 accident in which two children and an adult were killed in a wreck involving two school buses, a crash in which one driver was reported to have been texting and driving.

As you may know, texting and driving is an issue I am passionate about, as I am all about issues that help keep our children safe. At the moment, only six states—California, Florida, Louisiana, New Jersey, New York and Texas—require seat belts on school buses, with Arkansas now phasing in safety restraints. I hope that Tennessee decides to follow suit soon.

In the meantime, if you have any questions about this issue—or have a loved one that has been injured in a school bus accident—don’t hesitate to give me a call at 615.256.6666. I believe a municipality is liable for failing to place seat belts on its school buses and would be happy to discuss this with you.