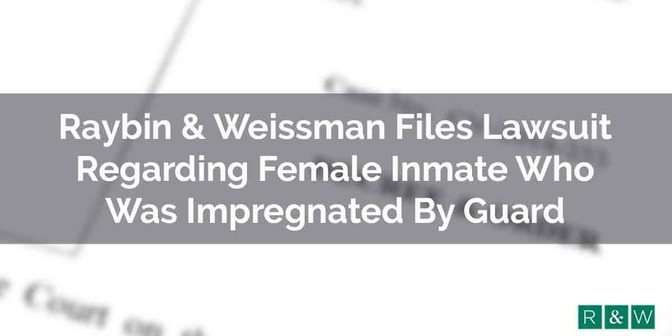 Raybin & Weissman recently filed a federal lawsuit on behalf of their client, a female inmate who was repeatedly raped and impregnated by a guard at the Moore County Jail.

Said lead attorney Ben Raybin: “Jessica Fowler is just one of many women who have been sexually abused by a man in a position of authority. People in jail are among our most vulnerable citizens and have their lives largely controlled by those guarding them. Because of the imbalance of authority between correction officers and inmates, Tennessee law makes it illegal to have sexual relations with inmates.

“The officer in this case has already taken responsibility for his actions by pleading guilty in criminal court. But the larger question is how he was able to rape Jessica on so many occasions over such a long period of time in what is supposed to be a secure, monitored environment. As our Complaint alleges, Moore County knew or should have known this illegal activity was going on but failed to stop it. This lawsuit seeks to hold the County accountable.”

The story has been covered by news outlets including The Tennessean and NewsChannel5.

You can view the full lawsuit here.