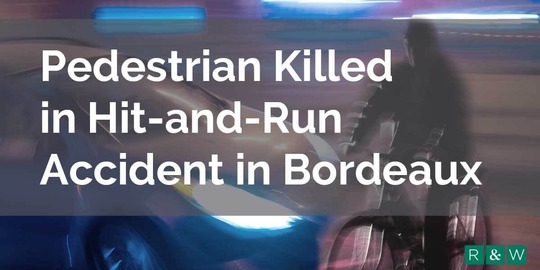 Earlier this month a 24-year-old woman was killed in a tragic early-morning pedestrian accident in the Bordeaux neighborhood of Nashville.

According to WKRN, the accident took place in the 3100 block of Clarksville Pike near Buena Vista Pike when the woman—who had been riding her bicycle along Clarksville Pike with her boyfriend—stopped to walk across the road to visit a convenience store.

She was then hit by a 2000 Chevy Impala, which failed to stop at the scene.

The victim was subsequently transported to Vanderbilt University Medical Center (VUMC), where she passed away.Meanwhile, the driver of the Impala drove her car to VUMC, where she is employed as a food service worker. A fellow employee took note of the damage to the front end of her car and notified police, who questioned and arrested the accused.

Per Metro Police, the 62-year-old driver of the Impala has since been charged with:

Pedestrian Accident Fatalities in Nashville at an All-Time High

Unfortunately, accidents like the one described above are not an anomaly. The number of pedestrians being killed in accidents on Nashville area roads is higher than ever, with 2017 the deadliest year for pedestrians in Nashville’s history.

What accounts for the increasing danger? In part, the rising number of fatalities is due to the ever-increasing number of cars, trucks, pedestrians, cyclists and motorcyclists on our roads. The prevalence of texting and driving (not to mention other forms of distracted driving) is yet another contributing factor.

As the Nashville Pedestrian Death Registry puts it, “Nashville is not a safe place to walk. For a city of our population, we have an inordinately high number of pedestrian deaths. We, as a city, have not built pedestrian infrastructure with any consistency or quality [and] these policy decisions, or lack thereof, have resulted in dangerous conditions….”

But it almost goes without saying that if you’re walking or cycling around Nashville, it behooves you to follow the kind of safety tips that might have made a difference in the Bordeaux accident described above.

For example, you should always cross in a crosswalk, you should make sure drivers acknowledge your presence before crossing, and you should avoid crossing streets with multiple lanes in each direction. According to NashvilleLook4Me.com, “62% of all pedestrian fatalities occur on city streets of four or more lanes.”

If you or a family member has been a victim of a hit and run driver, don’t hesitate to contact us online or call us at (615) 256-6666. We offer a free, no obligation consultation and we serve Nashville, Davidson County and the rest of Middle Tennessee.