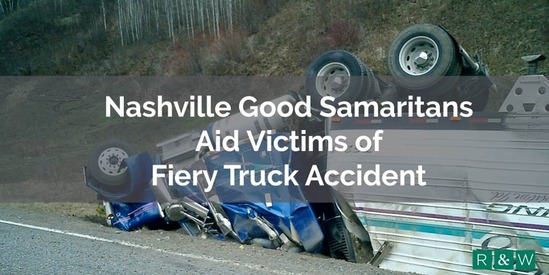 On Friday August 4, Nashville resident Damien Horne and several of his friends were on I-24 in Johnson County, Ill.—en route to the 77th annual Sturgis Motorcycle Rally—when Horne heard a succession of crashing sounds behind him.

“I looked through the rear view mirror and [saw] this semi plow through some cars,” he recently told NewsChannel5. “It was like a movie scene because you [saw] the cars flipped over, real chaotic.”

As it turns out, eight vehicles and 19 people were involved in the fiery accident, which occurred when a 37-year-old Minnesota-based truck driver allegedly fell asleep at the wheel. His truck then smashed into a slowed or stopped vehicle, resulting in a chain reaction crash that left the truck ablaze amidst a cloud of black smoke.

Horne and two friends—along with other Good Samaritans—didn’t hesitate. They moved quickly to help the injured, including a 52-year-old Missouri woman, who was unable to extricate herself from the passenger seat of a Toyota Corolla that she shared with her 21-year-old son.

“We couldn’t get her out so the next best thing was to try to move the car,” recalls Horne, noting that the burning semi-truck—just a short distance away—seemed poised to explode. “We drug [sic] the car out 50 feet away.”

Fortunately, and perhaps miraculously, no one was killed in the crash, but this accident illustrates the dangers posed by commercial truck accidents.

In this particular case, driver fatigue appears to be the cause of the wreck. (In fact, the truck driver—who was traveling with an 11-year-old child in the truck’s passenger seat, according to the report filed by Illinois State Police—was subsequently charged with Failure to Reduce Speed to Avoid a Crash and Driving While Fatigued.)

And though there were no fatalities, there were serious injuries, including those suffered by the aforementioned 52-year-old, who “suffered broken bones and had to undergo surgery after a metal rod impaled her knee,” according to News Channel 5.

The Causes of Truck Accidents

As I note on Raybin & Weissman’s Nashville Truck Accident page, driver fatigue is a common factor in truck, semi and tractor-trailer accidents, along with overweight or oversize loads, brake failure and defective tires.

With truck accident cases, it’s particularly important to hire an experienced personal injury attorney, as multiple defendants may be liable. Raybin & Weissman’s decades of experience with cases involving Federal Motor Carrier Safety Regulations allows us to focus on the most important issues of trucking accident liability. In this instance, those might include:

For safety’s sake, it pays to remember that truckers are often on the road for very long periods of time. And though there are regulations, one never knows if the trucker next to you or behind you is in compliance. So give trucks plenty of room wherever and whenever possible.

If You Have Been In An Accident with a Commercial Truck…

If you do have the misfortune of being involved in an accident with a truck, recall the following advice, found on Raybin & Weissman’s Trucking Accidents: What You Need to Know page.

At Raybin & Weissman, we will fight to get you fair compensation for injuries suffered in a truck accident—or if worse comes to worst, the wrongful death of a loved one. Contact me and I will get you justice.