More Truck Drivers Overworked in TN Because of Gas Shortage

Just recently, Governor Bill Haslam declared a state of emergency in response to a pipeline burst, which leaked more than 6,000 barrels of gasoline down in Alabama.  This pipeline is the major source of gas to Nashville and several other cities in the Southeastern United States.

When I read that an Executive Order had been signed on Friday to waive the hours of service requirements for petroleum truck drivers, I immediately thought about the safety of the drivers as well all other citizens travelling on our highways and interstates.

This waiver means petroleum truck drivers are now driving on our busiest roads for even more hours in order to meet the gasoline demands here in Tennessee.

And now that truck drivers hauling gas can drive for unlimited hours, I’m concerned about the increased risk of truck driving fatigue leading to more accidents in Tennessee.

Is gas really more important than the safety of the lives of families traveling down our highways? An exhausted trucker basically carrying liquid fire is clearly a recipe for disaster.

Truck Driver Fatigue is a Major Problem in Tennessee and U.S. Overall 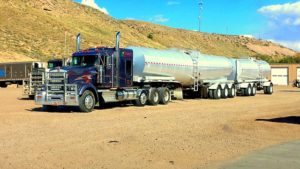 Truck driver fatigue is already a widespread national problem.  According to the U.S. Department of Transportation, driver fatigue has been found to be the leading cause of the loss of almost 4,000 lives taken in large truck accidents each year.  Specifically in the state of Tennessee, there have been about 130 truck accidents per year.

It turns out that over 1 million people were employed as heavy tractor-trailer truck drivers in the United States by the year 2012 according to The Bureau of Labor Statistics.  And as I was researching the topic of truck driver fatigue, I came across two daunting statistics:

In an effort to stop fatigued driving, the Federal Motor Carrier Safety Administration (FMCSA) made changes to the ‘“hours of service” rules for truck drivers in 2011.  The rule basically has two components:

Essentially, the FMCSA created this rule change to reduce the working week of a truck driver from 82 hours to 70 hours.  In my opinion, 70 hours is still way too many hours for someone to be driving a large truck hauling gas or anything for that matter.

One of the biggest problems is that fatigued drivers are usually not aware of their level of exhaustion.  Fatigue often causes delayed reaction times, reduces the driver’s ability to assess situations quickly, and causes the driver to drift into other lanes without any awareness.

Even with the FMCSA’s new rules in place, there are still trucking companies who push the limits of this regulation to increase their profits.  When a trucker is driving fatigued and causes an accident, the people injured in the accident are able to file a lawsuit according to Tennessee Law.

In order to win the lawsuit, there are three different elements which must be proven in a court of law:

Now that the FMCSA’s rules are completely waived for truckers hauling gas, our roads are filled with increased risk of accidents.  These truck drivers are on the roads working unreasonable hours, they’re inevitably suffering from fatigue and therefore making other drivers on the road at risk for being in a serious accident.

I realize how important it is to have gas but not at the expense of safety.

As a truck accident attorney here in Nashville, my number one priority is everyone’s safety.  I’m here to help and serve anyone who has been injured in a fatigued truck driver accident.  I have significant experience is helping injured Tennesseans recover losses from medical bills, lost wages, and vehicle repair costs related to their accident.  Please give me, David Weissman a call or fill out our contact form, and I will be in touch with you as soon as possible.