How Can Cyntoia Brown Be Released From Prison? 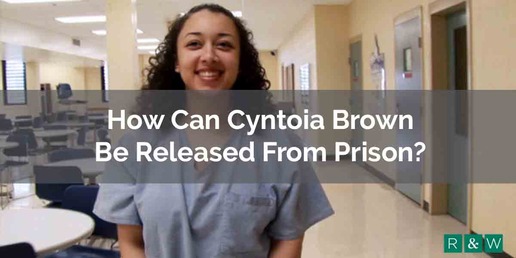 Cyntoia Brown, a Tennessee inmate serving a life sentence, has been in the news recently after celebrities and viral internet campaigns brought her case to light. Kim Kardashian even recruited her own lawyer to help. But what can be done under Tennessee law to secure her release?

There are probably only two ways for Cyntoia to be released: executive clemency or a change in the law.

Cyntoia’s case is compelling. She was convicted of murder in 2004 when she was forced into prostitution and killed a client when she was only 16. She was tried as an adult and sentenced to Life With the Possibility of Parole. Under current Tennessee law, “the possibility of parole” only starts after 51 years. Of course, this is essentially no possibility at all.

The most direct route to her freedom is “executive clemency.” Governor Bill Haslam has the authority to issue a “commutation,” which could either provide early release on parole or even terminate her sentence altogether. President Trump has no authority to intervene because her conviction was in state court rather than federal court.

Last year, I wrote an article about Executive Clemency in Tennessee called “Pardon Me.” My research showed that Governor Haslam had not issued a single pardon or commutation since he was elected in 2000. Moreover, Governor Haslam has delegated review of clemency applications to the Parole Board, which summarily denies 98% of all applications without the Governor even seeing the request.

In my article, I suggest that the Parole Board is exceeding its authority. They are supposed to review applications and make recommendations, not make unilateral denials.

However, Governor Haslam has the constitutional authority to override the Parole Board and grant pardons or commutations on his own.

How can you help? Contact Gov. Haslam’s office directly and tell him you support clemency for Cyntoia and other deserving people. If you are a Tennessee resident, you can also call your state senator and state representative.

Cyntoia could also get an early release if the state legislature changes how life sentences are calculated. Until 1995, a sentence of “life with the possibility of parole” meant 25 years until a person was eligible (but certainly not guaranteed) for release.

However, the eligibility was changed by law to 51 years. Since most inmates do not live that long in prison, such a sentence is functionally the same as a sentence of “life without the possibility of parole.” This is contrary to the idea that people should be punished differently depending on the circumstances.

There is currently a bill in the Tennessee legislature to change the time back to 25 years: HB135/SB795. The bills are sponsored by Rep. Mark White and Sen. Steven Dickerson, both Republicans who are serious about smart criminal justice reform. The reform is estimated to save $1.1 million per year.

I have been active in pushing for this change in my capacity as legislative affairs chair for the Tennessee Association of Criminal Defense Lawyers (TACDL). Although the bill was not approved last year, it remains active before the upcoming legislative session starting in January.

How can you help? Again, you can call Gov. Haslam’s office directly, as well as your state senator and state representative if you live in Tennessee.