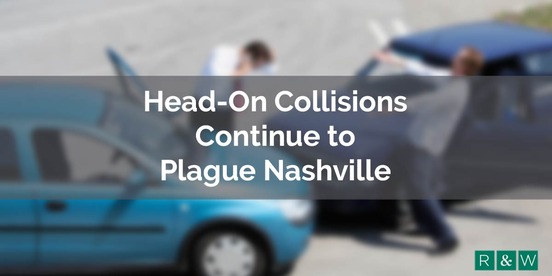 The New Year was just a few hours old when the Nashville metropolitan area witnessed its first wrong-way crash of 2018.

According to WKRN, a black Nissan collided head-on with a silver Chrysler near I-24 West’s Maxey Road exit, just before the Montgomery County line.

One of the drivers was taken to TriStar Skyline Medical Center for treatment, and the interstate’s westbound lanes were closed for an hour-and-a-half while the Tennessee Highway Patrol investigated the accident.

Unfortunately, it wasn’t the only recent head-on collision in the metro area. Just three days prior, multiple individuals were injured in a head-on car accident on Nolensville Pike near Elysian Fields Road.

In that case, reports indicate that a truck allegedly crossed over the center yellow line and struck a car head-on. As a result, the driver of the truck and three individuals in the car were transported to Vanderbilt University Medical Center, with the driver of the car having suffered serious injuries, according to police.

Most commonly, a head-on collision occurs when a driver makes an unexpected “lane departure,” as was apparently the case with a recent accident that killed a 62-year-old driver in Overton County and injured three others, including the driver who allegedly caused the crash, a 29-year-old who was pulling a 24-foot flatbed trailer with his pickup truck.

Another common scenario is when a driver enters a roadway going in the wrong direction.

The latter is what occurred when a 19-year-old drove the wrong way on I-440 in April of last year, killing a 25-year-old Ohio man when his car was struck head-on, one of several sad cases we highlighted in our recent post, Wrong Way Accidents a Common Occurrence in Nashville.

As one might expect, injuries tend to be particularly severe in head-on crashes.

If You’ve Been in a Head-On Collision…

In many wrong way and head-on crash cases, alcohol or other drugs are a factor in the accident, which is why we always recommended that victims consult with a law firm that has experience in both personal injury law and criminal law.

If you or a loved one has been the victim of a head-on or wrong way car crash we encourage you to consult with an attorney to discuss pursuing financial compensation for your losses, which can include compensation for medical bills, property damage, lost wages, and pain & suffering.

At Raybin & Weissman we offer a free, no obligation consultation and can be reached via our online contact form or via phone at 615.256.6666. We serve Nashville, Davidson County, and the rest of the Nashville metropolitan area.

In the meantime, we also encourage you to download our one-sheet on 5 Critical Things You Need to Know When You’ve Been in an Accident and keep it in the glove box or your car, truck, or SUV. You’ll no doubt find it invaluable if you have the misfortune of being involved in an auto accident.