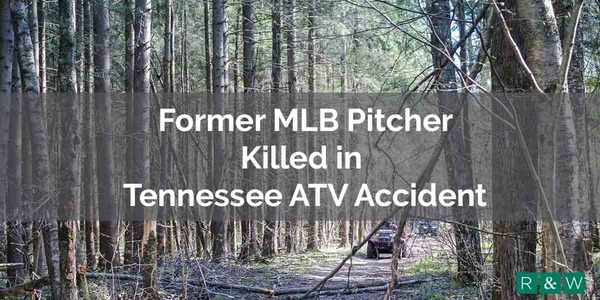 According to WKRN, the 28-year-old pitcher—who was drafted by the Toronto Blue Jays but spent the bulk of his career with the Chicago White Sox—was killed when his ATV hit an object on Dry Creek Road and rolled over. He suffered a broken neck in the accident, leaving behind a wife and newborn baby. The Tennessean reports that the victim’s wife and two other individuals suffered “significant injuries.”

While it’s an especially sad story, the accident probably wouldn’t have received much media coverage if it weren’t for the victim’s athletic career. Yet it should serve as a reminder that many more ATV accidents occur in Tennessee than one might think.

ATV’s (all-terrain vehicles) are extremely dangerous, especially when operated by inexperienced, careless or inattentive drivers, not to mention operators who are attempting to “show off” to their friends and family.

Consider the following statistics, courtesy of the Tennessee Department of Safety & Homeland Security. Prior to the turn of the century, fatal ATV crashes were rare in Tennessee. But between 1999 and 2014 there were at least eight fatal ATV accidents each year in the Volunteer State, and in most years, there have been a dozen or more fatal crashes.

Unfortunately, 2017 is shaping up to be another deadly year. In August, an 11-year-old boy from Sevier County died from injuries suffered in an ATV accident. That same month, a helmetless 32-year-old woman from Smyrna was killed in an ATV crash in Rutherford County and a 50-year-old man was pronounced dead at the scene of an ATV rollover in Robertson County. And in September, a four-year-old lost his life in an ATV wreck in Crossville, Tennessee, which is located in Cumberland County.

The rash of injuries and deaths helps explain why   Monroe Carell Jr. Children’s Hospital at Vanderbilt has teamed up with various organizations across the state to promote ATV safety among both children and adults.

As noted on their Tennessee Coalition for ATV Safety page, Tennessee has the dubious distinction of being ranked No. 7 in the United States in terms of ATV fatalities, with more than a hundred deaths between 2007 and 2010. In fact, Monroe Carell Jr. Children’s Hospital—along with the American Academy of Pediatrics and the American College of Surgeons—recommends that children 16 years of age and under should not ride or drive an ATV.

“Research indicates that children under 16 suffer a disproportionate share of injuries, do not wear helmets, and fail to receive formal ATV training,” notes the ATV Safety Project. “In addition, children are more prone to ATV injuries because of their lack of experience operating motorized vehicles, lack of psychomotor control and coordination, and lack of judgment leading to risky behavior and poor decision-making. ATV injuries [also] tend to be more severe.”

If you do choose to ride an ATV please adhere to the following ATV safety tips. It’s essential to:

Have You Or a Family Member Sustained a Serious Injury While Riding an ATV?

As demonstrated by the recent accidents highlighted above, ATV accident injuries are frequently severe and oftentimes fatal. Over the years, we have successfully recovered compensation for victims who have suffered a wide range of injuries as a result of ATV and motorcycle accidents, including:

If you or a family member has been a victim of an ATV accident, contact us or call us at 615-256-6666 for a free consultation. No matter the extent of your injuries, our lawyers will work diligently to negotiate a favorable settlement or prove your case in court.  We will fight to get you justice.