Electronic Medical Records Seeing An Increase In Use, As Well As In Malpractice Lawsuit Risks 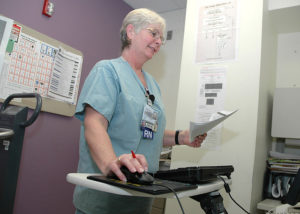 Due to a recent concern, healthcare organizations have begun a new series of research and inquiries driven by the legal liability fears attached to electronic health records (EHRs). An EHR carries the possibility of being admissible in court due to its legal representation nature by storing the medical condition and treatment of any given person, at any given time. Furthermore, EHRs revolutionize cluttered filing rooms by retaining all the patient information, in addition to changing how medical professionals document patient meetings and to what extent. However, some fear the records can be too revealing. The Health Insurance Portability and Accountability Act: privacy and security rules, requires all handlers of electronic healthcare data to keep an audit log of access to any personally identifiable information. Consequently, healthcare organizations have used the records to catch unauthorized employees looking at patient records, and therefore occasionally causing the corporations themselves to be liable. While the courts find metadata and the EHR system significant and ascertainable, some members of the general public worry that items will be missed, due to the well know rushed and hectic workings of a hospital, causing the records to be incomplete. Likewise, others claim that the malpractice risks will increase in response to the “artificially short deadlines,” for implementation, could tempt vendors to cut corners on developing projects and rushing employees through training. These factors when combined could inadvertently raise the risk of malpractice lawsuits against physicians and pressure liability insurers to raise their premiums.
However, others fully support the new system. Children’s Hospital has become the final health care system in the Milwaukee area to make the switch from paper to electronic health records. They expect to take the new system live within the later half of next year or early 2013. Yet, the final piece to tilt the scale in favor of EHRs was the incentive on the part of Medicare and Medicaid for those hospitals and physician offices that covert to EHRs. This new system, although possibly a breeding ground for lawsuits, also has the potential to force health systems to analyze and restructure the way they provide care. The NorthCrest Medical Center in Tennessee acting as an example of the latter. NorthCrest has reached the milestone of a 2009 law that provides Medicaid incentives to hospitals and physician offices that demonstrate “meaningful use” of an EHR. NorthCrest demonstrated “meaningful use” of the new technology designed to improve patient safety and decrease the overall cost of health care. Despite the seemingly high risk of malpractice claims, many healthcare organizations seem willing to adopt the new procedure in the never-ending attempt to provide higher quality care at a lower cost. Nevertheless, this is by no means a short term goal, the results of projects involving EHRs will likely not be apparent for years to come.
Sources:
Tennessee Hospital First In Nation To Receive Medicaid Incentives For ‘Meaningful Use’ Of An Emergency Department Electronic Health Record
Electronic Records May Increase Malpractice Lawsuit Risk
Big Data in health research IT requires new definition of “research,” says federal advisory committee
EHR Privacy Rule Threatens Research, Federal Advisers Say
Legislation Introduced To Boost Use Of Electronic Medical Records
Children’s Hospital begins conversion to electronic records
When EHRs Meet Malpractice Suits: New Concerns
Posted By: Eston Whiteside