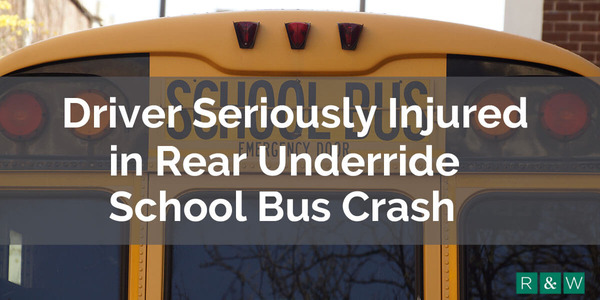 August 2018, a driver was seriously injured after rear-ending a Maury County school bus on U.S. 31. Looking at a photo of the accident scene, it’s miracle that the driver survived the accident, as the white sedan came to rest under the rear of the school bus with the frame of the bus intruding into the car’s passenger compartment.

As I’ve noted in the past, underride accidents are among the most deadly type of crashes. Most commonly they involve commercial trucks and occur when a passenger vehicle strikes and travels underneath a truck or trailer, as happened in April when a woman was killed when her SUV became wedged under a tractor-trailer on I-65 in Franklin.

But much like commercial trucks, the frame of a school bus is approximately the same height as a motorist’s head and torso, so in an underride school bus accident the edge of the bus extends into the “occupant survival space” and the result is often serious injury or death.

While there’s no word about exactly what led to the school bus crash on U.S. 31, the Tennessee Highway Patrol official quoted in the above-referenced News Channel 5 article seemed exasperated about what transpired, saying, “We need everyone to pay attention and avoid situations just like this.”

Nashville Schools: Back in Session
Indeed with Nashville schools open again, it seems a good time to review ways in which we can collectively help keep our kids safe.

While many people take school bus transportation for granted, those in charge of ferrying local students to and from school have an awesome responsibility. According to the Tennessee Department of Education, Tennessee schools transport upwards of 700,000 students a day on approximately 8,700 school buses.

The good news is that considerable attention is paid to both school bus driver training and school bus safety inspections. The Tennessee Department of Safety & Homeland Security notes that all individuals who have a school bus driver’s license receive mandatory driver training sessions each year—with a test following each session. Moreover, “school bus inspectors conduct annual and follow-up inspections on school buses in all school systems during the school year.” In addition, “spot checks are conducted throughout the year [and] inspections are conducted randomly to ensure that buses are being properly maintained.”

Better yet, Tennessee legislators are always looking at ways to improve safety. You may recall that a few new laws went into effect at the beginning of this year. For example, two key elements of HB0322 provide that “new school bus drivers complete a training program prior to transporting students.” Also, the bill requires that a school bus driver be at least 25 years of age.

Meanwhile, another new law amended the Tennessee Code to make it a class C misdemeanor to “knowingly operate a motor vehicle in any marked school zone … when a warning flasher or flashers are in operation, and talk on a hand-held telephone while the vehicle is in motion.”

That said, more could be done to make our school buses safer. For example, adding seat belts to Tennessee school buses is an idea I continue to support. At this time, only six states require seat belts on school buses, with Arkansas currently phasing in safety restraints.

AAA’s School’s Open — Drive Carefully Campaign
In addition, there are a lot of common sense things we can do as a community to help keep Nashville students safe, including those students who walk or bike to school.

For its part, AAA has a helpful list of tips, part of its School’s Open – Drive Carefully campaign, which has been in existence since 1946 and is designed to reduce child pedestrian injuries and fatalities.

AAA also emphasizes the importance of eliminating distractions like using your smartphone or eating while driving, asserting that “research shows that taking your eyes off the road for just two seconds doubles your chances of crashing.” Never mind the fact that “children can be quick, crossing the road suddenly or emerging suddenly between two parked cars.”

School Bus Safety Week
With all of the above in mind, I look forward to National School Bus Safety Week, which is held each year during the third full week of October. It’s described as “an active and evolving public education program and an excellent way for parents, students, teachers, motorists, school bus operators, school administrators and other interested parties to join forces and address the importance of school bus safety.”

This year’s theme is “My Driver—My Safety Hero.”

Next year’s theme will be “My School Bus, the Safest Form of Transportation,” a reference to a National Highway Transportation Safety Authority statistic that tells us that students are 70 times more likely to get to school safely when taking a school bus instead of taking a car.

Want to help our intrepid students stay even safer? Take a moment to review the safety tips that the National Association for Pupil Transportation has provided for School Bus Safety Week.

Injured in a School Bus Accident?
Of course, if you have any questions about school bus safety—or have a loved one who has been injured in a school bus accident—don’t hesitate to give me a call at 615-256-6666. I believe that a municipality is liable for failing to place seat belts on its school buses and would be happy to discuss this issue with you.