2017: Distracted Driving Crashes on the Rise in Nashville, TN 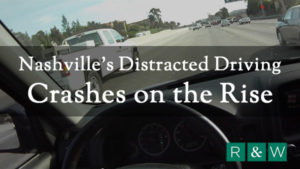 Distracted Driving Crashes on the Rise in Nashville, State of Tennessee

Late last month, the Tennessee Department of Transportation (TDOT) began accepting entries for its third annual Safety Message Contest, offering drivers the opportunity to craft the safety messages that appear on the Dynamic Message Signs above I-65 and the other interstates that crisscross Nashville.

Last year’s winning entries were both compelling and memorable. Among my favorites: “Get the cell off your phone and drive,” and “Practice safe text, don’t do it while driving.”

Of course, the idea behind these pithy messages is to help TDOT raise awareness about highway safety issues—and to save lives. Perceptive drivers no doubt have noticed that TDOT also uses the overhead signs to display roadway fatality statistics, helping underscore the need to draw attention to growing safety concerns about distracted driving, not to mention impaired driving and speeding, three of the five safety categories addressed by the Raybin & Weissman’s office—is no exception; there were 2,861 distracted driver crashes in Davidson in 2016 (as compared to 1,469 in 2006), second-most of any county in the state. Only Shelby County (Memphis) had more, with an eye-popping 7,143. 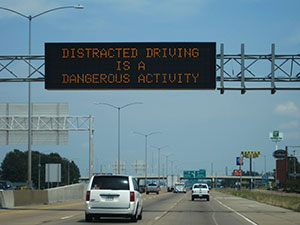 Unfortunately, the early indicators for 2017 aren’t promising. Year-to-date numbers* provided by the Tennessee Department of Safety and Homeland Security show that the number of traffic fatalities is up over last year, with Nashville-area fatalities (including Davidson County and Williamson County, among nine others) up twenty-seven percent as compared to 2016.

What can you do if you’re a concerned Davidson County resident—or spend a lot of time driving in the Nashville metropolitan area? First, familiarize yourself with the most dangerous intersections in Davidson County, five of which are in Madison or East Nashville, with two in Antioch and three in South Nashville.

Take note of the known dangers at these intersections and be extra-cautious when driving through them.

Meanwhile, take a few minutes to remind yourself of the 5 Things You Should Do If You Are Involved in a Car Accident. A little bit of advance preparation and knowledge can go a long way if you have the misfortune of being involved in a wreck.

Last but not least, I encourage you to have fun thinking of entries for the Contact David Weissman and the law firm of Raybin & Weissman for a confidential consultation of your case today at 615-237-8934.