Get A Free, No-Risk Consultation Today 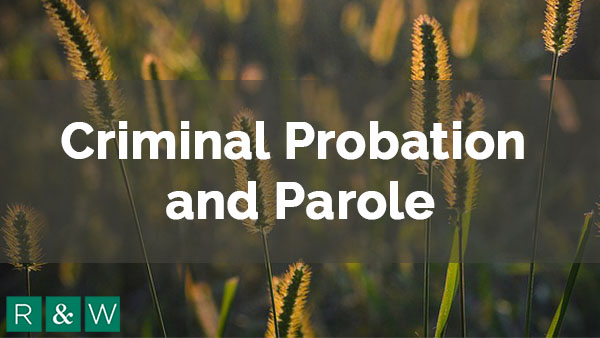 Probation and Parole are both mechanisms by which an individual that has been charged with a criminal offense in Tennessee can be supervised by the state in lieu of incarceration.

Probation occurs when an individual by plea agreement or after a sentencing hearing before a judge is ordered to serve all or part of their sentence under the supervision of a probation officer in lieu of incarceration in the local jail or in the state penitentiary if the probationer is charged by their probation officer for violating any condition of probation (e.g, failed drug tests, failure to complete community service, rearrested, etc.) then such individual will be ordered to reappear before the court and answer to such probation violation. If you are aware of a probation violation, call one of our Nashville probation lawyers immediately to help mitigate and negative effects. Not having a lawyer for your parole hearing is one of the biggest mistakes we see people make. If the violation is sustained, then the court may order that the entire sentence be served in jail or the penitentiary. The court does not award jail credits for the previous time served on probation, thus an individual on a six year sentence of probation could be subjected to serving the entire sentence in jail or prison if a probation violation warrant is entered a day prior to the six year anniversary of such conviction. Hollins, Raybin, & Weissman, P.C. are Nashville probation lawyers that handle probation violations throughout the Middle Tennessee area.

Parole represents a supervision status that is awarded by the Tennessee Board of Probation and Parole after a hearing before a panel of hearing officers. Raybin, & Weissman, P.C. handles parole hearings throughout the State of Tennessee. If the hearing officers determine that the incarcerated individual is worthy of an early release from their court ordered sentence then the Board will release such individual under the supervision of a parole officer. If after being paroled, the parolee is charged with failing to comply with any condition of their parole then they will be rearrested and incarcerated pending a review at a parole revocation hearing. If the revocation is sustained, then such individual could be subjected to serving the balance of their sentence in incarceration. Raybin, & Weissman, P.C. handles parole revocation hearings throughout Tennessee. Hiring a lawyer for your parole hearing could mean the difference between serving that probation period in jail or continuing with the traditional probation program.

Read more about our Nashville probation and parole hearing lawyers: David Raybin and Ben Raybin. They have the experience to help you.