Can Legal Cell Phone Use be Grounds for a Car Accident Lawsuit? 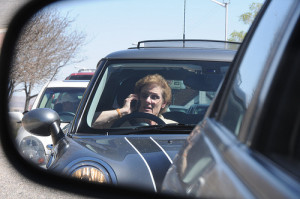 Although texting while driving is illegal in Tennessee, talking on a cell phone is not. However, cell phone usage can lead to distracted driving, car accidents and even fatalities.

According to a recent study by the National Safety Council, Tennessee had the highest number of fatal crashes involving cell phones in 2010 and 2011. Of the country’s 350 cell phone related fatalities in 2011, 93 of them happened right here in Tennessee.

First and foremost, this research shows that Tennesseans need to be careful about cell phone use while driving. But, it also shows that there is a lot of negligence that could be grounds for a lawsuit.

Injured by a Driver Who was on Their Cell Phone?

If you were injured in a traffic accident involving someone who was using a cell phone while driving, you may have a strong personal injury case against that person even if he or she was technically complying with the “texting and driving” law (T.C.A. 55-8-199). That’s because civil lawsuits consider whether the defendant was “negligent,” not just whether the person was obeying the law.

For example, playing Angry Birds or another cell phone game while driving on the Interstate might not violate Tennessee’s texting while driving law, but it would certainly be extremely dangerous and grounds to show that the other driver was not being careful.

What to do if You’re in a Car Accident

If you happen to be in a traffic accident and suspect the other driver was using their cell phone at the time, alert the police officer who responds to the scene so he or she can investigate further.

Contact an attorney as soon as possible to ensure you protect all of your rights, and be sure to mention the other driver’s cell phone usage.

“Fighting for your rights” Contact David Weissman and the law firm of Raybin & Weissman for a confidential consultation of your case today at 615-256-6666.