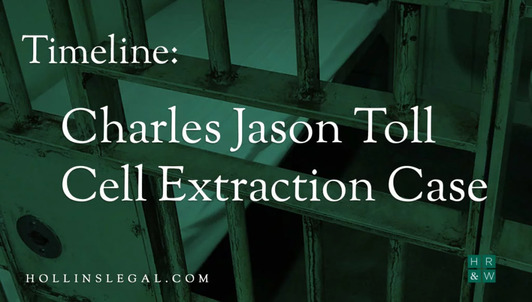 Riverbend Maximum Security Institution in Nashville, died during a forced cell extraction.  Dr. John Davis, the county medical examiner, performed an autopsy and New York Times expose on this case, that vital information had been requested of the defendants and not disclosed.  In light of this revelation, plaintiff moved for to set aside the prior judgement and to obtain a new trial.  On April 6, 2015, the presiding United States Federal District Court Judge, John T. Nixon, vacated the prior judgment and granted plaintiff a new trial, finding, “such course is required to prevent an injustice.”

As this civil rights case has attracted national attention, including coverage in The New York Times, we have put together a timeline of important events for those who are following the case. We will add important rulings and motions to the timeline as the case proceeds.

12/21/2009 – Jason Toll was transferred into Riverbend Maximum Security Institution for a parole violation related to an aggravated burglary conviction. He was eligible to be released on 8/23/2011.

8/17/2010 – Jason Toll, who was in solitary confinement at Riverbend, dies during a forced cell extraction. He was 33. His mother was told he died of natural causes.

8/18/2010 – The Davidson County Medical examiner concludes Jason Toll’s death was a homicide due to mechanical asphyxia and suffocation during physical restraint.

2/2/2011 – Jane Luna, Jason’s mother, sues Riverbend’s warden and several correctional officers, claiming they violated her son’s civil rights and used excessive force that caused his death. Contemporaneous with the filing of the lawsuit, plaintiff requests production of documents from defendants. Included in these pleading are numerous requests that encompass production of any resignation letters.

2/7/2011 – Correctional officer William Amonette resigns his position at Riverbend, writing that he had been treated poorly since asking questions about the Toll case and that his personnel records had been altered to show he received more hours of training than he did. “To put this simply,” Amonette wrote, “I cannot work somewhere where asking questions or trying to do what is right is punished.”

The letter is not turned over to Ms. Luna’s attorneys during the pre-trial discovery process.

4/25/2011 – Defendants provide in excess of 5,700 pages in response to requests. However, no resignation letter was included.

8/13/2013 – After two years and a half years of preparation, trial begins in the United States District Court, Middle District, in Nashville.

8/23/2103 – The jury sides with the Riverbend defendants, deciding they did not use excessive force or violate Jason Toll’s civil rights.

9/13/2013  – Attorney David Weissman files the first motion for a new trial, saying the jury instructions were misleading, confusing and prejudicial.

7/29/2014 – A front-page article in The New York Times, When Cell Door Opens, Tough Tactics and Risks, does an expose on this case. In her investigation, journalist Erica Goode discovers a resignation letter from correctional officer William Amonette citing issues with the Toll cell extraction including but not limited to instruction by superiors to falsify training records.

It is the first public disclosure of the letter, which was submitted 5 days after Jason Toll’s death.

8/12/2014 – Additionally WKRN investigative reporter Ben Hall does a story on the case. According to the WKRN article, Letter Raises Questions About Death Of Mentally Ill Inmate, a spokesperson for the , Neysa Taylor, stated in an email on Aug. 12 that ‘The personnel file which included Amonette’s resignation letter was provided as part of the discovery file.’

The WKRN articles goes on to state that “By phone, Taylor insisted the department turned the entire file over to the Attorney General’s Office which defended the officers for the Department in the federal lawsuit. She said it was up to that office to turn the file over to attorneys for Toll’s mother.”

8/22/2014 – Attorney Weissman files again for a new trial, citing the letter as new evidence that should have been disclosed before trial and would have likely affected the jury’s verdict.

8/29/2014 – Attorney for the defendants, Arthur Crownover of the Attorney General’s office files an affidavit in support of his opposition to the motion for new trial.  Included in Crownover’s affidavit are sworn statements that he did not know if the Amonette resignation letter was in the Amonette personnel file which was produced and that he did not intentionally withhold any documents from the plaintiff’s attorneys in discovery.

9/22/2014 – Crownover files a second affidavit stating a paralegal in his office discovered a computer file with an original scanned copy of Amonette’s personnel file and a redacted copy of the personnel file. Crownover further goes on to state a resignation letter of Mr. Amonette is not in these computer files; he does recall the resignation letter; he did not know whether it could have been in other documents he received during the process of the case; and he did not intentionally withhold any documents in the plaintiff’s case during discovery.

11/11/2014 – Subsequent to filing the 8/14/14 motion for new trial, Ben Hall of WKRN obtains pursuant to a Tennessee Open Records Act request a second version of the previously referenced letter. This version of the letter received by Mr Hall contains information that had been redacted from the letter received by the New York Times.  Attorney Weissman files a supplemental motion bringing this information to the court’s attention.

4/6/2015 – Judge Nixon grants a new trial. His written order says the new evidence plus the unique facts of the case require such an action “to prevent an injustice.”

4/14/2015 – The defendants ask the court to reconsider the granting of a new trial and the vacating of the prior judgement.

4/27/2015 – Plaintiff files a response in opposition to defendant’s motion.

10/19/2015 – Plaintiff files motion for sanctions and supporting memorandum based on allegations of intentional withholding of evidence by TN Attorney General’s office.

4/5/2018 -U.S. Court of Appeals for the Sixth Circuit ruled that a lawsuit over the death of 33-year-old Charles Jason Toll should be remanded for another trial.