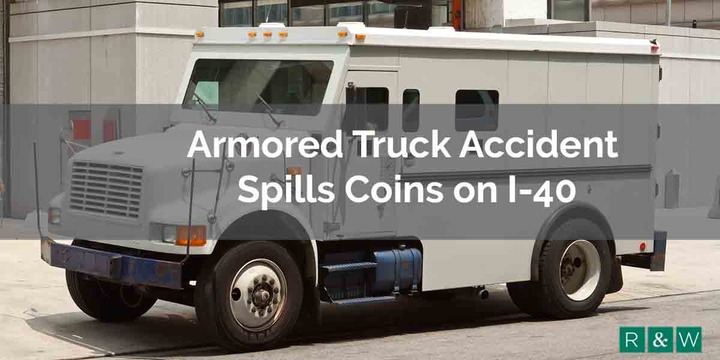 In some places the roads are paved with gold. Or so they say.

In others, the roads are painted gold, as in Peekskill, New York, where you can stand or drive on the last remaining section of a gold brick road—one which may have inspired the Yellow Brick Road featured in The Wizard of Oz.

And every once in a while you’ll find gold—or coins, or cash—on the road, as was the case following the recent wreck of a Garda armored truck on I-40 West in Bucksnort, Tennessee.

According to WKRN, coins of “a variety of denominations” spilled all over the pavement and median after the armored truck crashed “on the Humphreys County side of Bucksnort between Hurricane Mills and Cuba Landing” approximately 60 miles west of downtown Nashville.

Two people were injured in the accident, and one of the victims was flown by LifeFlight to Vanderbilt University Hospital. Fortunately, both individuals are expected to survive.

Notably, too, the Tennessee Highway Patrol (THP) went on to report that all of the coins involved in the spill—thousands upon thousands of pennies, nickels, dimes and quarters (or so it appears from THP photographs)—have been retrieved.

Armored Truck Accidents
Interestingly, serious accidents involving armored trucks aren’t at all uncommon, despite the fact that there are relatively few of them on our nation’s roads.

For example, just two weeks before the Tennessee accident, a GardaWorld armored truck overturned on U.S. 1 in North Carolina. And little more than a month ago, $25,000 in coins and cash spilled all over the highway in Kansas City after a Brinks truck was rear-ended by a Chevy truck, leaving the driver of the Chevy in critical condition. Then there’s the GardaWorld truck that hydroplaned and rolled over on an expressway in North Carolina. Plus the Garda armored truck that overturned after hitting a pothole, spilling some of the contents of the truck onto I-69 in Indiana.

Sadly, there have also been a handful of especially tragic armored truck accidents this year, like the one that took the life of a San Diego woman who was struck and dragged by a Garda truck while she was out celebrating her twenty-second birthday. Not to mention the head-on collision involving an armored truck that killed the three occupants of a four-door sedan in New Hampshire.  **   **

Keeping Money Lost in an Armored Truck Accident is Theft**  **
Believe it or not, it’s also not uncommon for the back door of a Brinks truck or Garda truck to swing open while the truck is in motion. And when money falls out, it can lead to a dangerous situation, if not a crash.

Consider what happened when more than half a million dollars fell out of a Brinks truck on I-70 in Indiana. “Troopers at the scene said that people were jumping over fences and crawling on the ground to claim some of the lost cash,” prompting State Police to remind people that keeping money that falls from an armored truck is theft. In that instance, money seekers created what a state policeman described as a “highly dangerous” situation.

“We had a lot of people who stopped in the middle of [the Interstate], which we know is dangerous driving a car. Imagine standing on it,” related a police sergeant.

But if such a scene has you losing a little faith in humanity, allow me to also relate the story of a man who saw a bag fall out of a truck that was driving in front of him on a Utah highway. Fearing the bag would be a traffic hazard, he dragged it off the road, only to discover it contained many tens of thousands of dollars in cash.

Unable to catch up with the Brinks truck that lost the money, he called police when he arrived at work and the big, heavy bag of cash was returned to the company, who rewarded the Good Samaritan with $5,000 for his honesty.

Raybin & Weissman: Nashville’s Truck Accident Lawyers
While not every incident or accident is as remarkable as some of the ones highlighted above, if you or a loved one has been injured in an armored truck accident or other truck crash, contact us online or call us at (615) 256-6666.

We’re Nashville’s truck accident lawyers and over the years we have worked with countless truck accident victims in Middle Tennessee, helping them to obtain compensation and get their lives back on track. No matter the extent of your injuries, our personal injury lawyers will work diligently to negotiate a favorable settlement or prove your case in court. We will fight to get you justice.