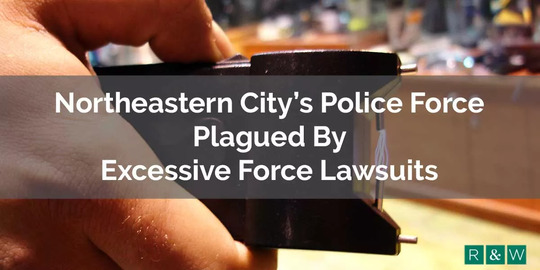 In March of last year, a 17-year-old boy was walking with two friends in Allentown, Pennsylvania, when a police officer ordered the group to stop and speak with him. The group did as they were told and a conversation ensued, though the officer soon became hostile to the teen and his friends, according to a federal civil rights lawsuit filed after the incident.

At that point, according to the lawsuit, the teen began running away from the officer, who drew his taser and fired at the boy, striking the victim in the back and buttocks. The shock from the taser caused the teenager to fall face-first to the pavement, causing serious injuries that required surgical intervention, including fractures to his face and jaw and several broken teeth.

“You’re not supposed to tase people who are running away, and certainly not under those circumstances,” the victim’s attorney toldThe Morning Call, who filed the lawsuit last month in U.S. District Court.

It’s not the first lawsuit brought against Allentown police by citizens who suffered injuries or claimed police used excessive force in utilizing a taser. According to the aforementioned newspaper, “the city [has] settled four such lawsuits since 2015 for $375,000, and three [including the above-named lawsuit] are pending.”

In one of the other cases, a high-school student’s mother sued after an Allentown police officer allegedly shot her in the groin with a Taser.

“The city settled after a federal judge found shortcomings in the city’s training and policies could amount to deliberate indifference to the constitutional rights of residents,” wrote The Morning Call.

Notably, the most recent suit alleges that the Allentown Police Department “routinely failed to perform legitimate investigations of allegations of misconduct by officers, but instead acted to cover up and falsely justify police misconduct. The result, the suit alleges, [is] a culture and custom within the department that condone[s] and encourage[s] constitutional violations….”

In fact, one of the common goals of federal civil rights lawsuits like the cases discussed above is to change the prevailing culture in police departments.

Our Experience With an Excessive Force Taser Case

Earlier this year, Raybin & Weissman filed an excessive force lawsuit in a Taser case, with the suit alleging that Cheatham County Sheriff deputies repeatedly Tased our client while he was restrained in a restraint chair and unable to resist.

The case attracted local, regional, and national attention and was ultimately resolved after a $750,000 settlement with Cheatham County, which is located approximately a half-hour northwest of downtown Nashville.

As I noted in our press release, “Federal law provides a civil remedy to compensate citizens whose rights have been violated, which also serves to hold law enforcement accountable…. Most importantly, the Sheriff has stated that steps are being taken within the jail to help ensure this never happens again.”

How Our Law Firm Can Help with an Excessive Force Case

If you have been a victim of what you believe to be the use of excessive force and/or the improper use of Tasers or stun guns by police, we encourage you to call us at 615-256-6666 for a free, no obligation consultation. Experienced excessive force attorneys are few and far between, and it’s vital to work with a law firm that has experience with federal civil rights cases.

Similarly, if you’re an attorney outside of Tennessee looking for help with a case in your state, don’t hesitate to contact us online or call us at the above phone number. We fight to get justice for victims of excessive force.