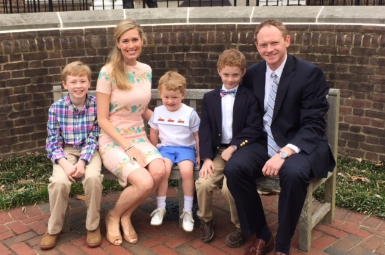 Hayes Springer’s birthday was just around the corner. He would have been going into the second grade at Scales Elementary School. Instead of balloons and a birthday party at the Springer’s on June 16th, Hayes birthday, there were blue ribbons in the front yard to commemorate a life taken away too young.

On a Wednesday afternoon, Hayes was killed in a rear end accident on Old Hickory Boulevard near the intersection of Granny White Pike in Brentwood, just miles from his home.

Hayes was in the third row of his mother’s Honda Odyssey in a booster seat when their vehicle was hit from behind by a Jeep Wrangler. Paramedics rushed him to Vanderbilt Children’s Hospital but, tragically, he didn’t survive the wreck.

Jennie Springer, Hayes’ mother, of Brentwood was slowing down in the left lane of traffic, almost to a complete stop, when the collision occurred. She also had her 9-year-old son, Battle Springer, in a booster seat in the second row of the vehicle. Jennie and Battle were very fortunate to have walked away with non-critical injuries.

Unfortunately, just another all too common instance of a distracted driver destroying lives. According to the statement apparently given to police, Scott Simpson stated that he was attempting to retrieve a backpack that had slid off his front seat. When Simpson looked up after grabbing his backpack, he didn’t have time to avoid colliding with the back of Springer’s minivan.

This devastating accident could have easily been avoided if Simpson had simply waited until a red light to attend to this trivial matter.

Police stated that there was no evidence of drug or alcohol involvement at the scene. This is why I am so passionate about spreading awareness about distracted driving. Anyone can fall prey to this type of behavior. You could potentially alter yours or someone else’s life in a matter of seconds.

Almost all rear-end accidents occur when another vehicle is stopped at a traffic light or is in the process of slowing down for traffic. Drivers should always be aware of upcoming traffic lights to prepare for a yellow or red light to decrease their speed at a reasonable rate.

When driving anywhere, but especially on heavily trafficked roads such as Old Hickory Boulevard with higher speed limits, it is important to keep at least a three second following distance behind the closest vehicle in front of you. This provides enough time to brake or change lanes if a vehicle suddenly slows down in front of you. 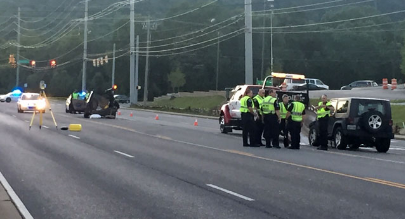 We all can get distracted easily, however it is imperative we keep distractions to a minimum when driving. The faulty driver in this accident was distracted by a moving object inside his vehicle that occupied his attention, ultimately resulting in the death of an innocent child.

Here are a few tips to avoid potential distractions.

A Trusted Hand Is A Call Away

The Springers won’t get their son Hayes back, but this family and others like them deserve the best legal assistance out there.

If you or a loved one you know has gone through a horrible ordeal with an accident, let me and my legal team offer a hand when it is needed most. As a passionate advocate against distracted driving, I’ve represented scores of individuals and families to restore a sense of normalcy back in their lives after an accident.

No child or family member can be replaced but our team can assist in your long road to recovery.

“Fighting for your rights”  Contact David Weissman and the law firm of Raybin & Weissman for a confidential consultation of your case today at 615-256-6666 or contact us online immediately.