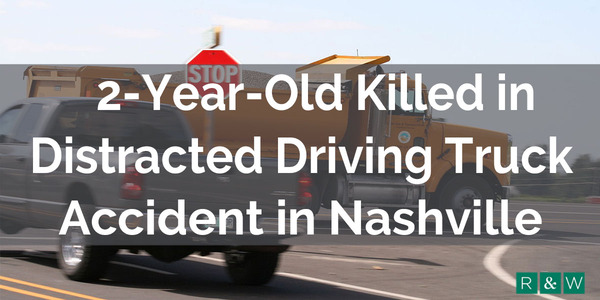 Dump truck driver Shawn Gardner was driving west on I-440 around 9 a.m. on May 15 when he allegedly took his eyes off the road to look for items that had fallen onto the floorboard of his truck.

According to police, with his eyes off the road, he rammed into a trio of cars that were stopped in traffic near the exit to 21st Avenue South/Hillsboro Pike. Per investigators, his 2015 Kenworth dump truck rear-ended a 2008 Mercury Mariner, which in turn struck a 2006 Nissan Frontier, causing the Frontier to collide with a 2010 Cadillac SRX.

Gardner was uninjured and the 67-year-old driver of the Nissan suffered non-life threatening injuries, as did the mother and father of a 2-year-old boy, all three of whom were in the Mariner and transported to Vanderbilt University Medical Center (VUMC).

Tragically, the 2-year-old, buckled into a rear child safety seat, died of his injuries that same afternoon at VUMC. The accident was reminiscent of a similar accident that took the life of a 7 year old boy from Brentwood last summer—and the kind of senseless distracted driving accident that is all too common on our roads these days.

According to the National Highway Safety Transportation Administration (NHSTA), 391,000 people were injured and 3,477 people were killed in distracted driving accidents in 2015. While the NHSTA describes texting as “the most alarming distraction,” anything that takes your attention from the task of safe driving increases your risk of causing a crash.

The above described accident involved both a visual distraction—which the Tennessee Highway Safety Office describes as a task “that require[s] the driver to look away from the roadway to visually obtain information”—as well as a cognitive distraction, which include “tasks that require the driver to take his/her mind off driving and think about something other than the driving task.”

As one might expect, visual and cognitive distractions dramatically add to the risk of causing a rear-end collision—the most common and most dangerous type of accident, one which typically occurs when the victims’ vehicle is struck while at a complete stop or slowing to a stop.

Over the years, Raybin & Weissman has represented many victims of distracted driving accidents in Davidson County and the rest of Middle Tennessee, many of which have been rear-end collisions involving commercial trucks.

As I noted on our Nashville Truck Accident Attorneys page, “truck accidents are more complex than other accidents because trucking companies or other parties may be liable.” It takes skilled lawyers to handle cases involving commercial trucks, thanks to “the complicated relationships between shippers, freight companies, equipment owners and truck drivers,” which requires careful analysis of all of the evidence. “In some cases, we are able to identify multiple defendants whose insurers may be financially responsible for [the victims’] injuries.”

If you or a family member has been the victim of a distracted driver or seriously injured in an accident involving a commercial truck, contact Raybin & Weissman for a free consultation or call me at 615-256-6666.